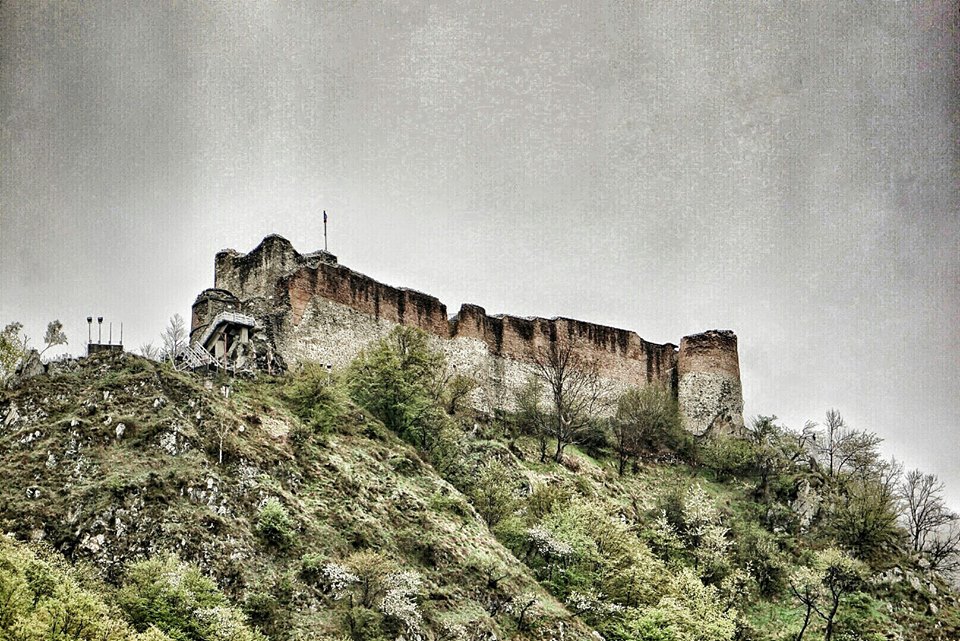 At the foothills of the Carpathian Mountains, lies one of medieval history’s oldest citadel’s that once housed a Wallachian Prince who would become one of Romania’s most notorious leaders, Vlad Tepes III.

Since I was a little girl, I’ve always had a fascination with Count Dracula, and have also enjoyed many of the Grimm Fairytales and folklore. OK, if I’m being completely honest, my love of counts started when I was three years old with “Count von Count” from Sesame Street.  Later, I moved on to Bram Stoker’s Dracula, and eventually onto learning the real life history of Vlad Tepes III.  Kermit the Frog was nice and all, but Count von Count really was the coolest muppet.  Even though they are just fictional characters, they are based on something, or someone, else.  Count von Count was based on a character portrayal by Bela Lugosi’s Dracula, which is based on Bram Stoker’s Dracula who is based on Vlad Tepes III. aka Vlad the Impaler.  Did you follow all of that?!  Vlad is the real man behind the myth and lived in a real castle known as Poenari Castle.  It sits high above in the foothills of the Carpathian Mountains in central Romania known as the area called Transylvania.  It is the real deal.

Many in westernized cultures associate the castle of Dracula to be the magnificent Bran Castle. Sadly, there is no factual evidence that Vlad ever lived at this location, however, it is the castle Bram Stoker chose to write about for his novel, Dracula.  Bran Castle was neither visited by Vlad during his reign or even Bram Stoker himself.  The castle is located in the city of Bran, Romania and is worth the trip if you are into the story.  It is very westernized and touristy though, unlike the lesser known Poenari Castle.  For a few picture of Bran Castle, check out my article here.

Today, Poenari Castle sits in ruins after having been destroyed by an earthquake in 1888 that toppled over the ramparts that once stood on top of the castle.  It was paramount that I trek the hillside above to tour the ruins.

Driving down the infamous Transfăgărășan road, Romania’s second highest mountain pass known for it’s twists and turns with sports car enthusiasts, the rain was starting to come down.  This is a really remote location, and I did not want to chance getting lost in the mountains and would rather be as prepared as possible.  I had watched some YouTube videos of others who had made the journey to get an idea of what the road might look like leading to the castle. I knew it was near a hydroelectric plant so I kept an eye out for that.  As I came around a bend, I saw the hydroelectric plant up ahead and knew I was getting close.  There was a parking lot to a hotel on the left side of the road. I pulled in.  The rain was coming down really hard now and it was starting to thunder and lightening.  But, where is the castle? I know I am so close, it has to be right here!  Just then, I turned by head around, and as if beaming lights with sound were playing, there it was! My first view of the castle! Sitting strong and alone on the mountain top with the rain pouring down and the thunderous clap of lightening, it was a magical moment I will never forget. There in front of me lie a 500 year old citadel that housed Vlad Tepes III!  In the morning, I would make the trek to the top.

The hotel I had randomly pulled into was a place called Pensiunea La Cetate.  This was the perfect place to stay for the night and I highly recommend staying here if you visit Poenari.  I walked in, quickly got a room for $27.00 usd and was taken to my room.  No one spoke English but we made it work and the staff was super friendly.  A woman showed me to the room.  It was large and spacious having two balconies.  She took me over to the first balcony, opened up the door to it, and there it was… a direct view of the citadel!  I was grinning from ear to ear… I think I may have even had a tear in my eye.  I was overcome with excitement, and it’s pretty safe to say I was a little delirious from being awake for 2 days straight.  However, I had traveled so far and for so long just to lay eyes upon this historic building that housed monumental medieval history.  I never dreamed I would make it here.  I have now become an American in love with Romania.

The hotel had a fantastic restaurant with authentic Romanian cuisine.  After checking in and seeing the room, I headed to the restaurant to fill my belly and then off to sleep at about 8pm.  Romania is incredibly inexpensive to eat and stay compared to USA standards.

Tip for ordering water in most European countries:  Make sure you specify if you want distilled water or water with bubbles.  If you do not specify, you will get water with bubbles because that is what most Europeans like to drink.  When I ordered a water here at the hotel, the waiter looked at me and asked “gas?”.  I know there is a joke in here somewhere.  This is also important if you order drinks like lemonade.  At some places, if you do not specify what type of lemonade, they might bring you a lemon drink similar to a lemon flavored soda pop.  Other places may have English on the menu or a photo so you will know what type of drink it is.

Back in the hotel room, sometime in the middle of the night, I was visited by a pack of wolves snarling outside the side balcony.  It carried on for several minutes, and I hated to think what was happening outside those doors.  It was scary but I was just glad to be on the other side of those doors.  There are many sheep in the area, and farmers have to be very careful with their cattle.  There are also bears and many wild dogs in the area that you must watch out for.

When morning came, I felt refreshed and ready to climb to the citadel.  The base is located next to the hotel, just a little ways past the parking lot.  There is a sign that marks that you have arrived at Poenari Castle.  Once you walk through there, you will see a very small wooden building which is a tiny gift shop and then the stairs that will begin your trek.

It took roughly 30 minutes to reach the top with little stopping.  There are railings the entire way and a few places where you can stop and take a break if you need to.  You can climb at your own pace and if someone needs to pass you, there is plenty of safe room for them to do so. 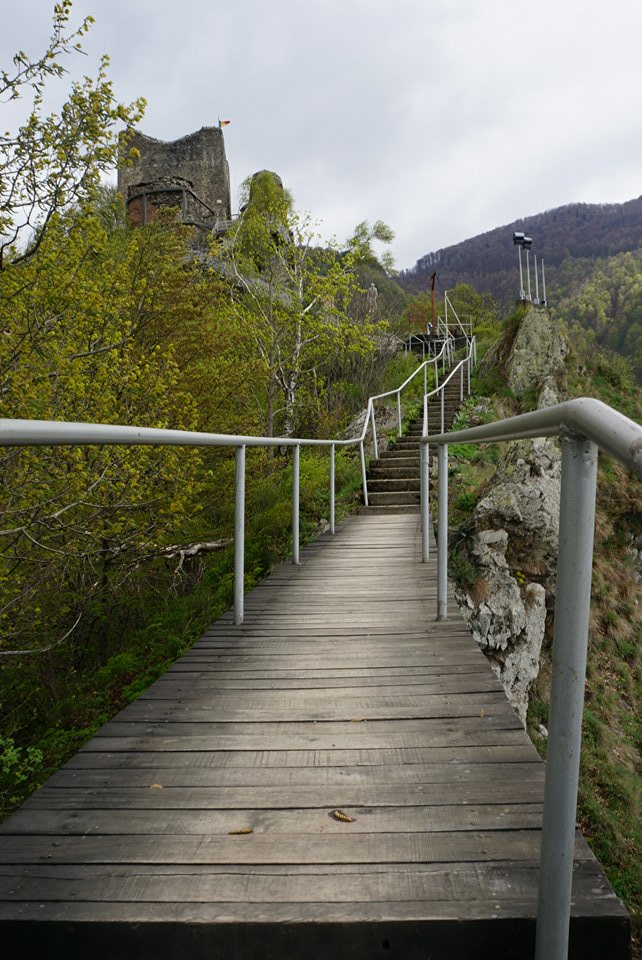 Once you reach the top, there is a very narrow bridge you must cross.  You can see on the right side it is a complete drop off.  It is amazing anyone chose to build something in this spot.  Just before the bridge, there will be someone there to collect money for your entrance.  You must have Romanian money to pay this so plan ahead.  It’s only a couple dollars, but they will not accept the American dollar or Euro.  The closest bank is about a 15 minute drive from the hotel through a more populated area so make sure you have some Romanian Leu with you. 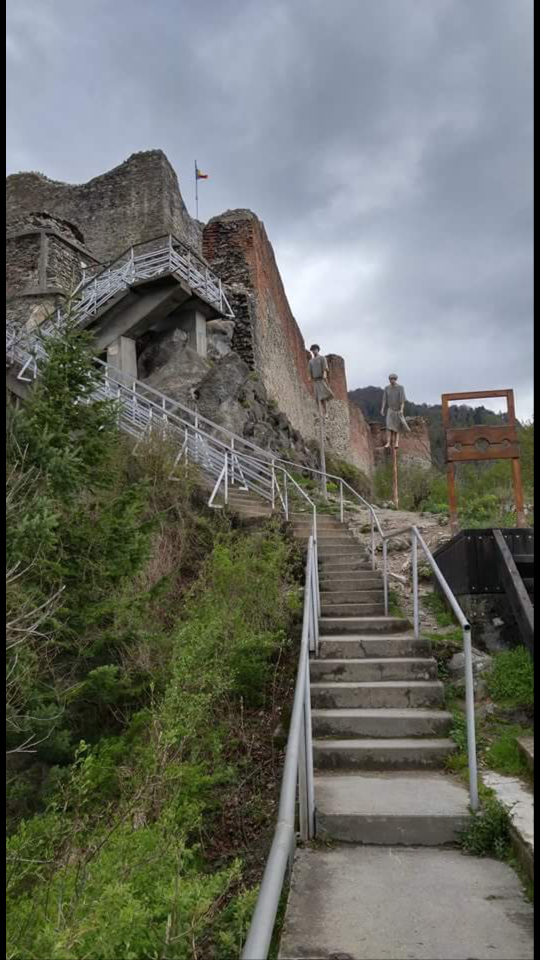 There are a few props for your amusement that you will find before entering the citadel.  This was not the location of Vlad’s huge impaling, but his castle was built by many of his prisoners.  If the idea of impaling makes you a little squeamish, just remember, these were not ordinary times, and Vlad only impaled enemies and those that threatened the Romanian people.  The Ottoman Turk Empire was infiltrating their military throughout this region attempting to increase their empire.  Vlad chose impaling as the most horrific treatment he could think of to protect the Romanian people and to publicly display what would happen to you if you chose a dual with him and lost.  This tactic worked on several occasions causing the Ottomans to often retreat.

When Vlad first found this location, there had been part of a building here that archaeologists are aware of that dates back to the 13th century.  That could be from the stone bottom that you see.  The red brick may have been made during the 15th century when Vlad took the building over. 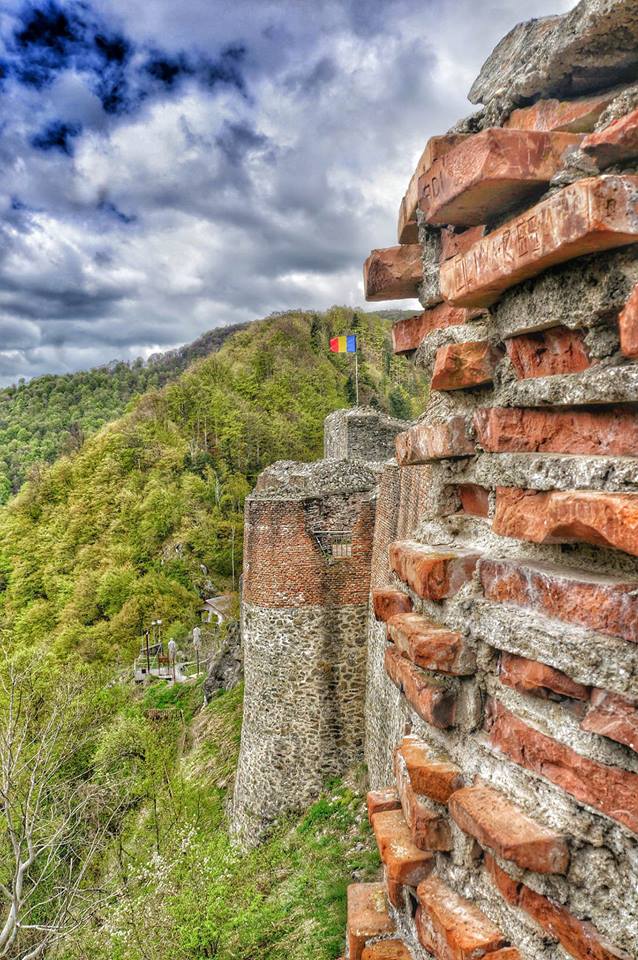 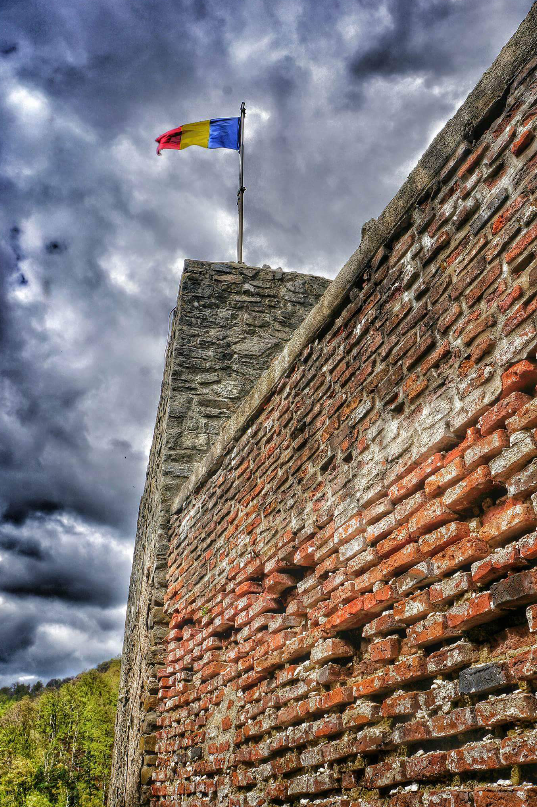 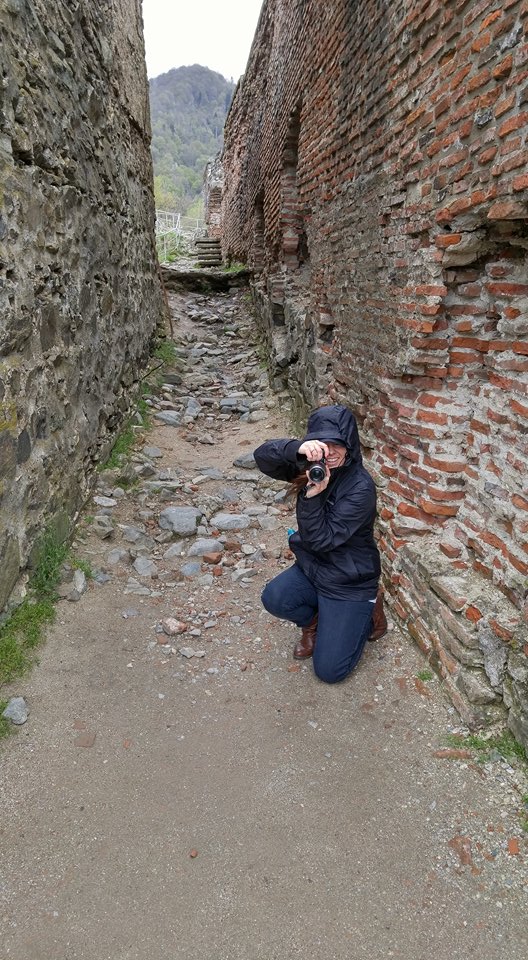 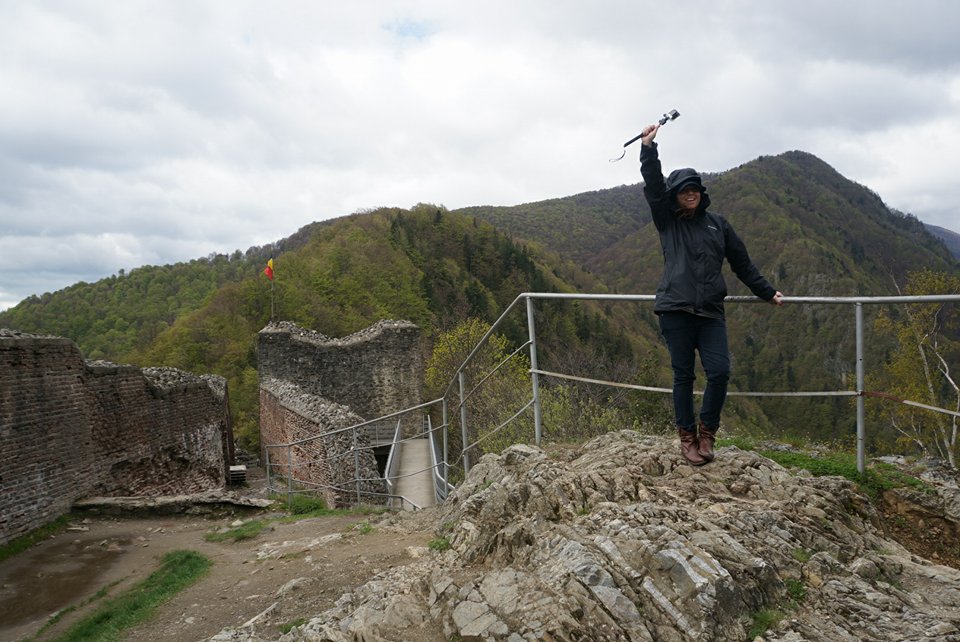 There is a story about the last day that Vlad stayed at the Citadel.  The Ottoman Turks were making their way to the castle to capture Vlad and his wife.  His wife threw herself off the ramparts of the castle into the Arges river below.  In order for Vlad to escape and to trick the Turks, he ordered his people to nail the horseshoes onto the horses backwards so they would leave marks in the snow that appeared they were coming instead of going.  It worked, and Vlad was able to escape. 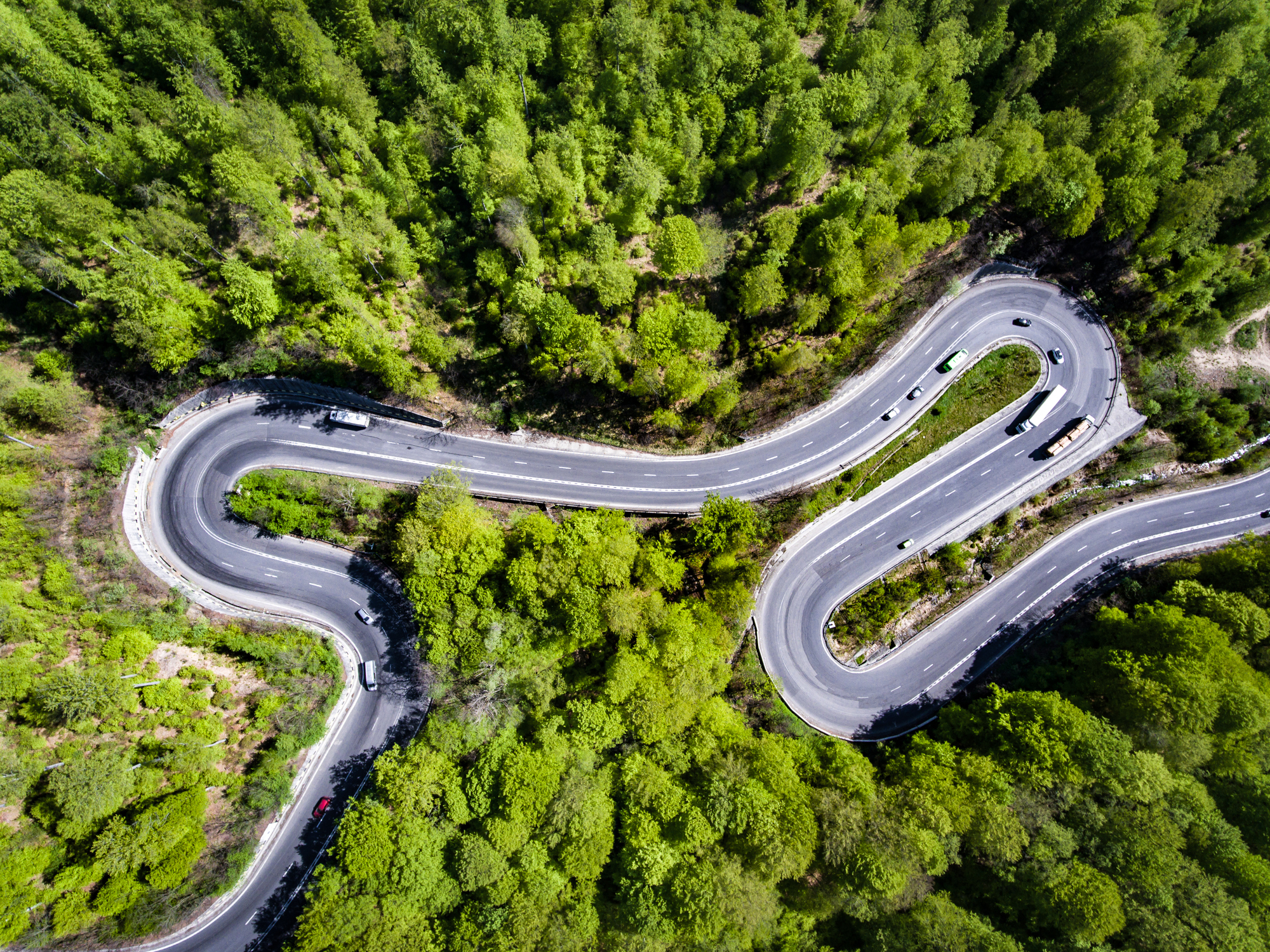 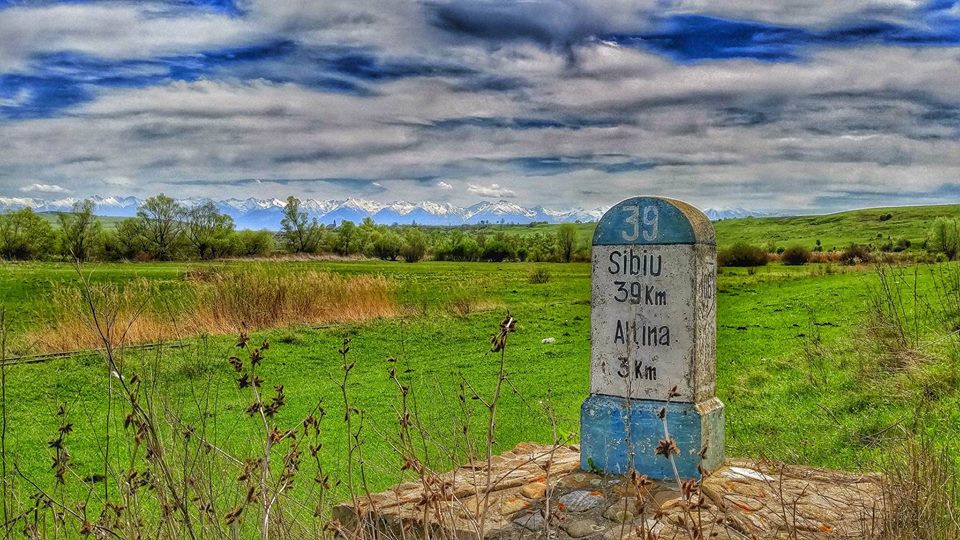 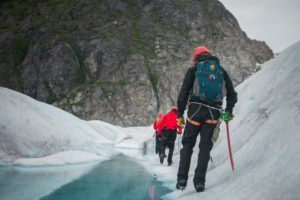